The name of the Marco Polo Argali brings all passionate mountain hunters and hunters of big-horn sheep out in goose bumps. To have hunted this coveted mountain sheep in the high Pamir, the “roof of the world” is the dream of every overseas hunter. This majestic, legendary wild sheep can be hunted in Tajikistan and Kirgizstan but the biggest trophies come from Tajikistan. 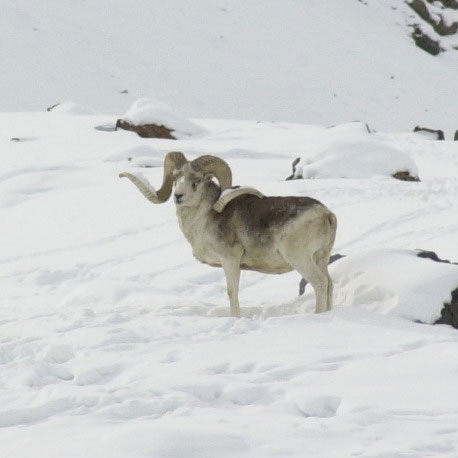 Good rams can boast 55 inch - 58 inch (about 140 - 147 cm). Prime trophy rams have a horn length of over 60 inch. There are many species of Argalis but the Marco Polo sheep of the high Pamir is arguably every hunter’s most coveted trophy. We hunt in October and November (high season), in spring then also in February / March. The wide valleys of the Pamir plateau offer very good stalking. The terrain is less steep than in Kirgizstan; it is hilly rather than mountainous, making the hunt and search for really outstanding, old rams easier. If a major trophy carrier has been located, its quality is precisely estimated in the spotting scope and then the ram is stalked on foot. Our local guides are experienced sheep hunters. In our hunting areas on Lake Karakul, Marco Polo trophies reach 53 inches - 58 inches. We also organize hunts for confirmed, over 60 inch Marco Polos. These hunts involve considerably more work and so we are only able to quote a price on request. The hunt for a confirmed ram of 60 inches + can take place in any hunting area in Tajikistan.

We recommend the months November/December as well as February for hunting strong rams. 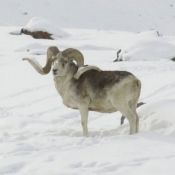 After a changing history, the territory, of what is now Tajikistan, was eventually absorbed by Russia. The Soviet Republic of Tajikistan was founded in 1929 but declared its independence in 1990 after the collapse of the Soviet Union. It has been a republic (area 143,100 km², population 7.3 million, capital Dushanbe) since 1991. It borders Kirgizstan to the north, Uzbekistan to the west, Afghanistan to the south and China to the east. Most of the countries are high mountains with many valleys. The largest part of the famous Pamir mountain range belongs to Tajikistan; the southern part of the Pamirs lie in Afghanistan and the eastern part in China.

The Pamir plateau is the greatest goal of all sheep hunters, with a very high game population, enormous game density and a fantastic trophy quality of old, mature rams. This wild sheep has an absolutely special position among the trophy hunters.

Arrival is via Osh / Kyrgyzstan. From Osh it's about 8 - 9 hours by car to the camp.

You will stay in simple mountain houses with solid masonry walls and equipped with all the necessities of life. Base camp is located at a height of 4.000 m. This is where the hunt begins. At this height, Marco Polo sheep are not a rare sight from the camp. Transfer by car from Osh approx. 8 - 9 hours. Group size up to 4 hunters. Please contact us for further details.

During your hunt, your accommodation can be a fly camp for a few hunting days.