Hunting of the four different subspecies of Iberian Ibex!

First-class organisation of the hunt, a large animal population, very comfortable accommodation and wonderful scenery all contribute to making Spain a fascinating country in which to hunt. Spain has a very long hunting tradition. The hunt for Spanish ibex is generally held to be a classic. Hunt one of the four species of Spanish ibex (Gredos, Beceite, Ronda, Sierra Nevada). 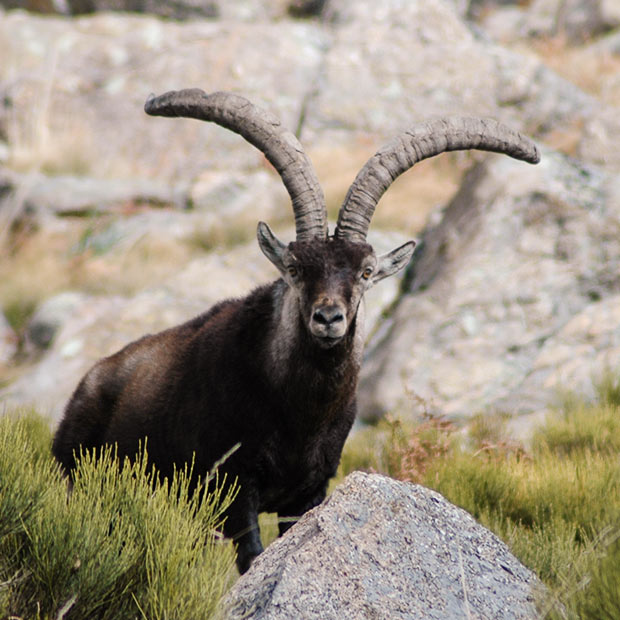 The Gredos Ibex is the most known and biggest Ibex of the four Spanish Ibex. The in the west of Madrid located Sierra the Gredos, (about 180 km) domestic Gredos Ibex has noble, lyriform horns. The rut season is from the 15th of November - 15th of December. Outside of the rut season the Ibex are together in groups. We organize the hunt in the best Spanish hunting area, in the north hunting area of the state National Park Sierra de Gredos. The north hunting area is perfect for young and old and there are the biggest Gredos Ibex of Spain. Gold medal Ibex from 230 CIC points is guaranteed in 2 hunting days. The trophies are on average 250 CIC points. They shoot Ibex with 260 - 280 CIC per year. A gold medal Ibex has a horn length from 75 - 90 cm.

From the airport in Madrid, where we are picking you up, there are about 180 km to your hotel. By car it is about 2 - 2,5 hours. We can also offer you a helicopter transfer. 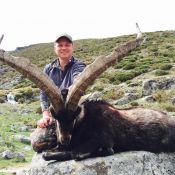 The Beceite ibex is the second largest ibex in Spain in terms of trophy size, after the Gredos ibex. The district extends over tens of thousands of hectares. Most parts of the hunting parts are very well developed and have mountain roads that sometimes lead to the very top. A normal to good physical condition is required. Hunting takes place at an altitude of 300 - 1,600 meters. The hunting season is from October to the end of May. Die besten Jagdmonate sind während der Brunft im November und Dezember, sowie in den Frühlingsmonaten im April und Mai. Sie können jedoch in der gesamten Jagdsaison erfolgreich auf Medaillen Steinböcke jagen.

Your accommodation is a traditional Spanish hotel in the middle of the mountains. The cozy hotel is located in the small village of Aliaga, from where you drive to the hunting area every day. Depending on the weather and in which part of the hunting area you hunt, it is about a 25-40 minute drive. The average trophy size is in the silver medal class. You can count on a trophy of 215-230 CIC points. The game population is excellent and we can hunt with up to four hunters with a guiding one-to-one. 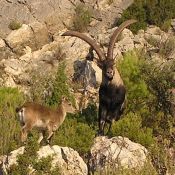 The Sierra Nevada Ibex lives southeast of Granada in the Sierra Nevada in Andalusia. The horns of this subspecies are similar to those of the ibex from Beceite or Gredos, but are shorter and significantly weaker at the base. The district is located in the middle of the Sierra Nevada. You have a wonderful view of the sea from all mountain peaks. The area is rocky and only partially covered with thick bush. The horns reach an average length of 55 to 65 cm, better ones also 65 to 70 cm. 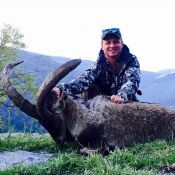 The Ronda Ibex is the smallest species of the Spanish Ibex. This species lives west of Malaga (Andalusia), in the Ronda Mountains. The horns of this subspecies point backwards, in a classic V-shape and are more similar to those of the Alpine ibex. Thus, the Ronda ibex differs significantly from the other Spanish species. On average, the horns reach lengths of 50 to 55 cm, better ones also 65 to 70 cm or in exceptional cases even 80 cm. The Ronda Mountains are very similar to the Sierra Nevada. 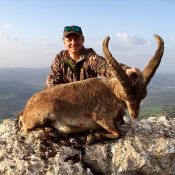 We are offering one of the best red legged partridge bird shooting in Spain. The hunting area has a size of 4.000 hectare and is situated 2 hours south of Madrid. The normal method to hunt the red legged partridges is called “ojeos” or driven hunt. Beaters walk through the brush, the partridges flying downhill towards the line of the shooters, at the base of the hill.

WWe are organizing 4 drives per day and a group of 6 – 8 hunters takes an average of 1.000 birds per day. We recommend you to bring a pair of shotguns. Each shooter has a loader at his side, who always has the second shotgun ready and reloads the one that has been shot.

You will be met at Madrid airport and we will organize all transfers to your accommodation by car.

The accommodation has 12 double rooms, each with its own bathroom. The finca is from the 16th century. It is only a 15 minute drive from your accommodation to the hunting area.

Numbers of shooters:
From 4 - 10 hunters 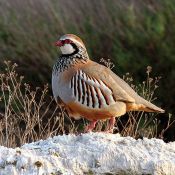 From the most European airports, you have a good connection to get to Madrid several times a day.

The Gredos Ibex is the most known and biggest Ibex of the four Spanish Ibex. We have the best hunting areas for you, complete with a large ibex population and excellent trophies. Enjoy the wonderful scenery all contribute to making Spain a fascinating country in which to hunt. It is very comfortable to get there. The very comfortable accommodations are ideal for combining your hunting trip with a family holiday. Your stay will be made all the more agreeable by Spanish hospitality, delicious food and outstanding wines.

Accommodation Gredos Ibex
You are accommodated in a hotel, which was built for King Alfonso XIII. in 1926 for his hunting trips in the Sierra de Gredos. The current hotel has a long tradition and is located in the northern hunting area of the state National Park Gredos. The hotel "Parador de Gredos" stands out not by modern chic, but by its own atmosphere and almost one hundred years of history. It is equipped of generous bedrooms and living rooms. The restaurant serves regional products and dishes.

Accommodation Beceite Ibex
Your accommodation is a traditional Spanish hotel in the middle of the mountains. The cozy hotel is located in the small village of Aliaga, from where you drive to the hunting area every day. The former flour mill was renovated and converted into a hotel and equipped with spacious bedrooms and living rooms. The restaurant spoils you with regional products and dishes.