Canada is the only country where polar bears can be hunted. The wildlife resources are very good and therefore sustainable hunting in our hunting grounds can be organized with our partner. Along with the Kamchatka bear, the polar bear is considered to be the largest land-based predator on earth.

The polar bear (Ursus maritimus) lives in the northern polar regions and is closely related to the brown bear.

The hunts take place in the areas of various Inuit communities, in the east as well as in the central Arctic region. The hunt starts from the camp, which is about 100 miles from the nearest Inuit village. 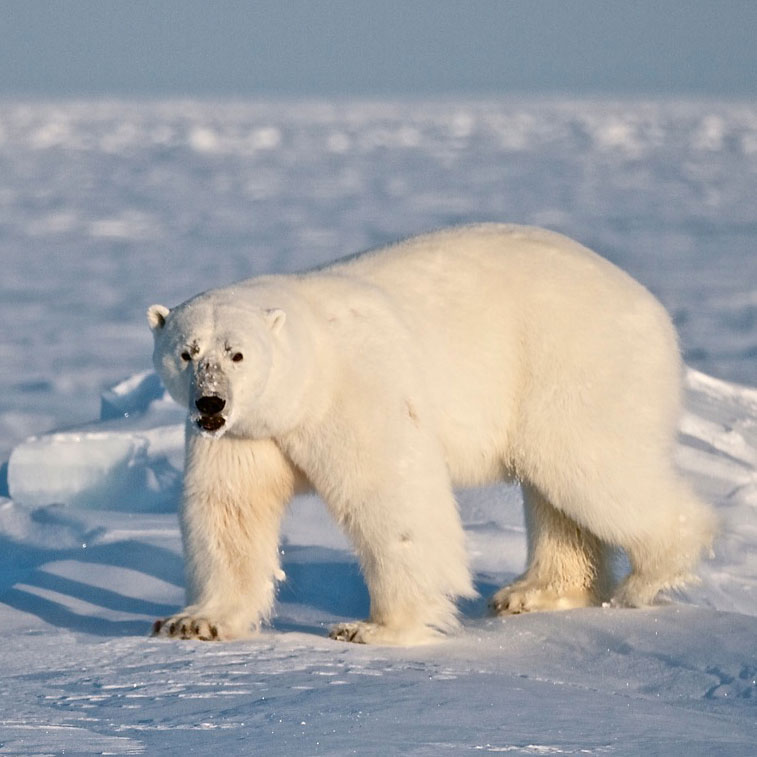 Game species Canada / Arctic
Polar bear
In the traditional spring hunt, which is carried out with dog sleds, the success rate is extremely high in this 10-day hunt. The hunts take place in the Broughton Island and Lake Harbor areas in the Baffin area. The journey takes place via Ottawa or Edmonton, from there it continues with a domestic flight. While hunting the polar bear, a musk ox can be hunted as well. Polar bears range in size from 8 to 10 feet (2.4 to 3 meters) and big bears up to 11 feet. Mature bears can weigh up to 600 kg.

We also organize the hunt in autumn in combination with Walrus.

Equipment:
Good winter clothing is required when hunting in autumn. In addition, warm functional underwear, as well as wool or thick fleece shirts, wool sweaters, down jackets or fleece vest. What is absolutely necessary is a high jacket collar and a hood that can be closed perfectly so that it covers everything except the nose and eyes. Wind and moisture protection through a membrane such as Gore-tex are also essential. The recommended shoes are winter boots with rubber undershoes and inner shoes.

It is important to have ski goggles as well as a face mask and very warm, wind and waterproof gloves. A winter hat with thick (fur) lining and ear flaps should also be packed. The down sleeping bag should have a comfort temperature of around minus 40 degrees Celsius for winter hunting and down to minus 20 degrees Celsius for autumn hunting. It must be packed watertight. A trekking backpack is suitable for replacement clothing, shoes and gloves. Binoculars like 8x30, 8x40 or 10x40 is well suited for observation. Bringing a spotting scope and rangefinder can be helpful. The shooting range is between 50 and 200 meters. Ideal calibers are .300 Win. Mag. or Wby. Mag., 8x68 S, .338 Win. Mag., 9.3x64 or 375 H&H. We recommend a bolt action rifle as a weapon, so that a quick sequence of shots is ensured. Your weapon should be equipped with an open sight and a variable, detachable optic.

The ice bear (Ursus maritimus), also called polar bear (following the English name), is a species of predator from the bear family (Ursidae). It lives in the northern polar regions and is closely related to the brown bear. Along with the Kodiak bear, it is considered to be the largest land-based predator on earth. In addition to the traditional spring hunt with dog sledges, which has been 100% successfully organized by our partner in recent years, we can organize a summer/autumn hunt. The use of boats promises a 100% successful hunt. A decisive advantage for autumn hunting is the milder climate compared to spring hunting. No special clothing is required either. During the autumn hunt, the boat is driven along the coast, as soon as a good bear comes in sight, it is stalked on foot. There are a limited number of licenses. This hunt can also be combined with Atlantic walrus, which is also hunted along the banks.

You are accommodated in cozy hunting camps (tents, huts) in the vastness of the Arctic.